Long-Term Front-Running suggests a different tack: instead of guessing at the near future, investors should try to predict which companies will take off in the next few years and buy their stocks before other people catch on. By getting in before the crowd, they'll benefit both as the company's earnings rise and as investors catch on to the story and award the company a higher price/earnings multiple. In my experience, the best-performing stocks are usually a product of those two things paired together, so investors who look for “compounders” should find the book interesting.

Short-term traders should also find it interesting. Trading off immediate events can induce tunnel vision and make one's trading strategy essentially reactive. Looking past the near term should give traders both more perspective and less competition.

A big strength of Long-Term Front-Running is its versatility: it discusses both corporate fundamentals and investor sentiment, both macroeconomic and company-specific events and processes, etc. It also touches on the importance of “reflexivity,” i.e. how perception can affect reality in the financial world and create positive feedback loops.

Unfortunately, in a way the book's versatility is also a drawback. Since it covers a lot of ground in just 100 pages, its specific ideas are mostly rules of thumb, i.e. guidelines on what to do in typical situations. And as I get more investing experience, I've come to believe that many of the best investment opportunities involve atypical situations.

For instance, Fritzell writes that “The best time to bet on a commodity is when inventory is tight; future supply is likely to be low while demand is racing ahead.” This is generally true, but the shale-drilling revolution provides a counterexample. There have been times in the recent past when natural gas inventories were low, yet prices didn't rise. The shale revolution seems to have overwhelmed the traditional relationship between inventories and future prices.

Lest I seem too critical, I'll say that I enjoyed many of the book's rules of thumb. For instance, it includes a checklist for identifying corporate fraud that I found very useful. I also liked its case studies, particularly the one about Delclima, an Italian HVAC manufacturer that began life as a neglected spin-off but soon became a stock market darling.

To give you a flavor of the book, here are some of my favorite passages:

The potential to tap future customer demand can be summarized in the term “consumer surplus.” It can be defined as the difference between the price customers are willing to pay and the what the product costs. If there is a huge gap, then the company is potentially sitting on a goldmine.


Return on invested capital itself is not a useful metric: it often reflects a cyclical peak in the industry or the mature phase of the ramp-up of a particular technology.


Products that aren't particularly functional – Tamagochi, baseball cards, Beanie Babies, etc. - are fun for a while but we usually get tired of them. If the product is fashionable and also serves a real functional purpose – for example UGG shoes or Canada Goose jackets – they may survive for a longer period of time.

(In my opinion, this mix of fashion and function explains much of Apple's popularity. Apple's smartphones cost much more than competing phones—they clearly have a fashion premium. Yet they're also cheaper and more functional than what preceded smartphones—the iPhone is like a mobile phone, laptop, digital camera, watch, and GPS rolled into one. The combination of so many things in a convenient device lets people justify paying the fashion premium.)


Not every company is able to take advantage of industry growth... in a commodity industry, ruthless competition may take away most of the opportunity for gain, despite a solid underlying growth trend.


Sometimes people criticize new technology due to certain weaknesses but fail to realize that those weaknesses will disappear over time. Online streaming in the early 2000s was unbearably slow, but with the spread of fixed broadband, online streaming was almost certain to take off.


High credit growth not only pushes money into the stock market, it also improves the value of assets used as collateral in loans, improving creditworthiness and fueling further credit growth.


Whenever a particular method of investing becomes popular, flows into that strategy start to accumulate. Those flows can by themselves help that strategy perform and attract further inflows.
Posted by James at 4:32 PM 1 comment:

A convertible bond becomes “busted” when the issuer's stock price falls so far below the strike price as to render the conversion feature nugatory. When this happens, the convertible begins to trade like a regular bond. For instance, if bonds of similar size and credit quality trade at a 9-10% yield to maturity, the convert will typically trade at a price—almost certainly a big discount to par—that gives it a similar YTM.

Busted converts were great investments during the 2001-02 market downturn and again during the Global Financial Crisis. Their strong performance during those periods of stress piqued my interest, and I read as much as I could about the convert market, assuming that it would offer similar opportunities during the next crisis.

After a couple days of reading, I no longer think that will be the case. Actually, my reading suggests that converts will be relatively unattractive going forward, for several reasons:

• The market has shrunk. Since 2007, the face value of outstanding convertible bonds has fallen from approximately $700bn to $500bn worldwide and from $300bn to $200bn in the United States. (By comparison, Apple's market cap is $870bn.) There are two reasons why the market is smaller: One, many companies issue converts to save money on interest, and historically low interest rates obviate that. Two, convertible arbitrage funds are major buyers of converts, and since the GFC they've been forced to use less leverage than they'd previously used, reducing their buying power.

• With arbs using less leverage, there's less potential for forced selling to create bargains. Investor psychology has also changed. The convertible selloff after Lehman Brothers' bankruptcy was so ferocious in part because it took people by surprise. Nothing like that had happened before, at least not on the same scale. Now investors know it's within the realm of possibility, which I think makes it less likely to happen again. As the old cliché goes, a watched pot never boils.

• Transaction costs during the post-Lehman selloff were exorbitant, with bid/ask spreads equal to 7% or more of the midpoint price for many converts: 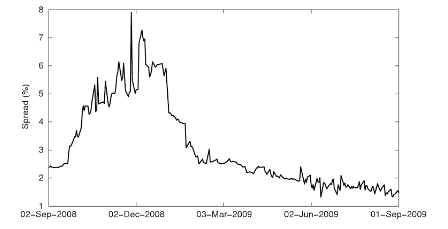 (Source: The Handbook of Convertible Bonds by de Spiegeleer and Schoutens)

The market was chaotic and illiquid, with December 31, 2008 13f-hr filings showing that various hedge funds had one bond—Ciena's $300mm May 2013 issue—valued at anywhere from 48 to 53 cents on the dollar. Buying converts in 2008 was a great trade on paper, but trading costs made the true returns lower.

• Convert issuers tend to be smaller, more speculative, lower-quality companies. Many of these companies also have debt that's senior to their converts—typically, converts are subordinated to all other existing and future debt issues. The GFC was painful but brief; in a protracted recession, converts would likely experience much higher defaults.

Technology companies are over-represented among convert issuers. I think this is because a convert is most attractive when the issuer's stock is volatile but it has low credit risk. Usually the two conditions don't go together: a company that's less likely to default will typically have a less volatile stock price. But tech companies often trade at high valuations because investors expect them to grow quickly. Hence the stocks are very sensitive to investors' beliefs about the future, and they can be quite volatile without implying anything about the companies' creditworthiness.

In looking at dozens of convert issuers, I found a surprising number that had more cash than debt. Even more surprisingly, the net cash didn't necessarily make them safe credits.

Many tech companies issued convertibles during the dot-com bubble. In 2001, after the bubble had burst and the tech industry was suffering, some of these companies still had net cash. How their converts performed from that point on depended on how they had financed themselves. Some issuers that had raised money primarily through converts defaulted, while the ones that had raised money through a mix of equity and convert issuance almost all survived. In the latter group, many converts paid off at par even after the issuer's stock had fallen 95-99%.

A couple of tech issuers managed to stay afloat only by repurchasing most of their outstanding bonds at a big discount to par. These buybacks meant that they technically satisfied their obligations, but most of their bondholders didn't benefit.

While the dotcom-era tech issuers generally treated their creditors well, that wasn't the case during the GFC. Many issuers with net cash took creditor-unfriendly actions:

• ADC Telecom bought back stock in late 2008 while its converts traded at 45 cents on the dollar.
• Ciena made a big all-cash acquisition in 2009 as the GFC appeared to be ending, taking it from a net cash position to a significant net debt position. Integrating the acquisition was more difficult than expected and Ciena lost money for several years.
• Energy Conversion Devices invested most of its cash in growth initiatives, only to find that its niche solar technology wasn't cost-competitive with polycrystalline solar cells.
• TTM Industries made a big acquisition in 2009 that took it from having working capital in excess of all liabilities to having significant net debt, primarily bank loans that were senior to its converts.

Energy Conversion Devices went bankrupt within a few years. The other companies survived and repaid their converts, but the expectation that their net cash provided a margin of safety turned out to be wrong.

By looking at issuers' recent actions, investors may be able to find net-cash issuers that are more favorably disposed to creditors:

• In 2002, Juniper Networks had $1.7bn of cash and $1.15bn of outstanding convertible bonds. That May, it acquired Siemens' networking business. Juniper had enough money to buy the business entirely for cash, but instead it paid in a mix of cash and stock, leaving it with a net cash position. A few months after the acquisition, it bought back ~18% of its converts at a discount to par. In 2003, it tendered for the remaining bonds at par.

• In 2007, Arris Group acquired C-Cor. Like Juniper, Arris made the acquisition with a mix of cash and stock that left it with a net cash position. It later bought back some of its converts during the GFC and stated in its 2008 10-K that “Maintain[ing] a strong capital structure, mindful of our 2013 debt maturity” was a key part of its corporate strategy.
Posted by James at 12:26 PM No comments: