I recently read Jack Schwager's trader-interview book The New Market Wizards, which includes an interview with Stanley Druckenmiller. Many people consider Druckenmiller one of the best investors alive, and he lives up to his reputation in the interview, sharing a number of fascinating anecdotes and ideas.

One idea in particular caught my attention. Druckenmiller tells Schwager that:

I never had more conviction about any trade than I did about the long side of the Deutsche mark when the Berlin Wall came down. One of the reasons I was so bullish on the Deutsche mark was a radical currency theory proposed by George Soros in his book, The Alchemy of Finance. His theory was that if a huge deficit were accompanied by an expansionary fiscal policy and tight monetary policy, the country's currency would actually rise. The dollar provided a perfect test case in the 1981-84 period. At the time, the general consensus was that the dollar would decline because of the huge budget deficit. However, because money was attracted into the country by a tight monetary policy, the dollar actually went sharply higher. When the Berlin Wall came down, it was one of those situations that I could see as clear as day. West Germany was about to run up a huge budget deficit to finance the rebuilding of East Germany. At the same time, the Bundesbank was not going to tolerate any inflation. I went headlong into the Deutsche mark. It turned out to be a terrific trade.


Today the United States has a similar combination of tight monetary policy and loose fiscal policy. The Federal Reserve has begun raising interest rates and shrinking its balance sheet ahead of its European and Japanese counterparts, while the US fiscal deficit is set to surge following a large corporate tax cut.

So after reading the interview, my initial reaction was to assume that the current regime is positive for the dollar. But after further research, I think the U.S. today has enough differences with Druckenmiller's two examples that any comparison is meaningless. I want to emphasize that I'm not a macro expert, so some of these arguments may be flawed, but here are what I see as the differences:


• The dollar is already relatively high.

In 1980, the dollar had fallen by half against yen and mark during the previous decade. In November 1989, the mark was off its highs versus the dollar and had been flat for the previous three years despite a large and rising trade surplus. Whereas today, the dollar's real effective exchange rate is near a decade high:

A chart of the trade-weighted US dollar index also puts the dollar's strength in stark relief:

The consensus of Wall Street currency strategists seems to be that, since the US growth has accelerated at the same time that economic data have surprised to the downside in many other countries, the dollar can only continue to rise for the foreseeable future.

By contrast, as Druck mentions, in the early 1980s “the general consensus was that the dollar would decline because of the huge budget deficit.”

Likewise, he tells Schwager that in 1989, “[Buying Deutsche Marks] was made easier by the generally bearish sentiment at the time. The Deutsche mark actually fell during the first two days after the wall came down because people thought that the outlook for a growing deficit would be negative for the currency.”

In the late 1970s and early 1980s, the U.S. ran trade deficits that were relatively small by today's standards, and it had a strong net international investment position. Germany's trade surplus steadily grew throughout the 1980s.

Today the U.S. has both a weak NIIP and a weak current account. A chart from Horseman Capital illustrates how much the US NIIP has deteriorated since the early '80s: 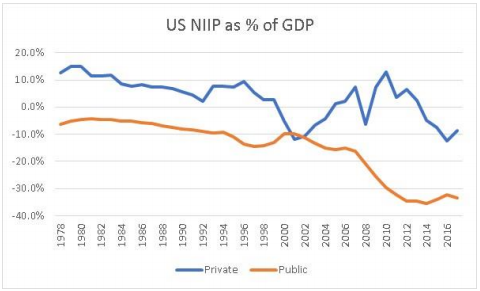 Also, my hunch—and I'll reiterate here that I'm not a macro expert, so this may be completely wrong—is that the NIIP plays a major role in determining whether deficits are good or bad for a currency.

Most investors have a home-country bias, i.e. they prefer to invest domestically so long as domestic investments have a competitive risk/reward. So if a country increases its supply of government securities (expansionary fiscal policy) and also guarantees that those securities earn high returns (tight monetary policy), and its citizens own significant foreign assets (a positive NIIP), some of them will sell those foreign assets to buy the newly-created domestic securities, which will push the country's currency higher. Whereas if its citizens have significant international debts (a negative NIIP), this dynamic isn't possible.


• The “return on deficit” will be lower.

In the early 1980s, the U.S. experienced two recessions that kept its economy below potential. In 1989, Germany had a significant identifiable need for investment in the form of integrating East Germany. By contrast, today the U.S. is nine years into an economic recovery, the unemployment rate is low, and there are many anecdotal signs of labor shortages.

An economy with minimal spare capacity and full employment will be less responsive to fiscal stimulus than one that with significant spare capacity and unemployment, so I would expect the current US deficit to be far less stimulative than the two deficits Druckenmiller mentions.

And even before the tax cut, the U.S. government was running large deficits in the midst of a long economic expansion. This suggests that a large part of the deficit is structural, so rather than being economically beneficial it's a sign of weakness.
Posted by James at 1:25 AM